The Detroit Tigers wasted a solid performance from starter Daniel Norris—Norris clearly didn’t have his best stuff but gave the Tigers six innings of 3-run ball—and a Nicholas Castellanos go-ahead homerun when Bruce Rondon and Kyle Ryan stumbled in the eighth inning.

Up until that point, things were looking pretty good for the Tigers. The teams had been trading runs and Daniel Norris had just surrendered the lead in the top half of the seventh inning when Castellanos put the Tigers ahead 4-3 with a solo shot in the bottom half. Ausmus pulled his starter, who turned in a more than acceptable performance in his first start of the 2017 season, and turned the baseball over to set-up man Bruce Rondon.

Rondon struggled in his previous outing, recording just a single out in a particularly miserable outing in Chicago as he gave up three runs to the White Sox. It was more of the same today, as Rondon once again failed to command his fastball. The big righty left with the bases loaded and no outs recorded, turning things over to recently recalled lefty Kyle Ryan.

Ryan, a new father, experienced a hectic day of travel returning from his stint on the paternity list. His Sunday wasn’t much better as he too struggled to throw strikes and eventually allowed all the inherited baserunners to score. After the dust had settled, the Red Sox had scored four times in the eighth, erasing a 4-3 Tigers lead.

In the ninth, the Tigers made an attempt at a comeback but ultimately fell to the Red Sox, 7-5.

Rondon took a deserving loss, Ryan got slapped with a blown save, and Norris saw his decision frittered away. Anibal Sanchez did some mop-up work in the ninth, and was relatively effective.

After the disappointing loss, Brad Ausmus said he and pitching coach Rich Dubee would have a discussion on Rondon, and his role on the team. 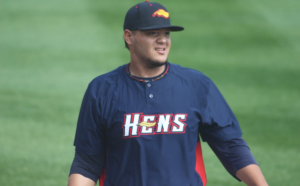 It sounds, for the time being at least, that the Tigers are back to having no clearly defined roles in the ‘pen outside K-Rod. And we all know how much Ausmus values clearly defined bullpen roles. Could we see prospect Joe Jimenez in Detroit soon?

Or perhaps the Tigers might give Angel Nesbitt another look? 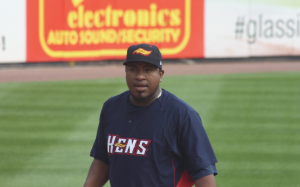 (All photos by Alexandra Simon)

I don’t know the answer to the eternal, undying question of the Tigers bullpen. All I know is that tomorrow will be b—oh crap, they’re facing Chris Sale?

Bullet Points Are For Losers
• Miguel Cabrera attempted to steal a base in the seventh inning. MIGUEL CABRERA. Unsurprisingly, he didn’t succeed. He hasn’t stolen a base since 2015.
• Tyler Collins hit a fly ball to right field that looked like it could carry the fence but, alas, fell short because his bat was defective.
• Norris threw first pitch strikes to 16 of the 27 batters he faced. (H/T)
• Dan Dickerson related that Rick Porcello said he struggled with his focus at times during his Tigers tenure.
• At one point Porcello collided with third base coach Dave Clark and appeared to hurt his hamstring, but seemed fine.
• Jackie Bradley Jr. was unable to play a day after crashing into the wall making a spectacular catch.
• Several Red Sox are still under the weather as a flu bug ravages the team (and broadcasting booth). Broadcaster Dave O’Brien became ill and had to leave mid-game yesterday, and Andrew Benintendi threw up during the game but stayed in.
• Sox closer Craig Kimbrel had an uneven outing, but managed to seal the victory. The Tigers got to the hard thrower a bit though, and Victor Martinez missed a game-tying homerun by a matter of feet.
• As mentioned before, Anibal pitched a scoreless ninth. 👀 👀 👀
• Tyler Collins is off to a quietly solid start as one half of an outfield platoon. He doesn’t get as much attention as JaCoby Jones, but the two of them (along with Mikie Mahtook and Andrew Romine) could very well hold their own until J.D. Martinez comes back.
• The aforementioned Andrew Romine’s had some impressive at bats early on this season. Romine went 2-for-4 on Sunday, and had a double off Porcello.
• Castellanos threw out Mitch Moreland at the plate and hit a big (at the time) homerun for the Tigers. He continues to impress with his bat (I’m not sure he’s had a bad swing yet), and hasn’t really hurt the Tigers on defense either.
• Justin Verlander vs. Chris Sale tomorrow! Really, really hope Kinsler clowns on him all game long.