We’re only a third of the way through the season, so not probably not very much. However, it did show us some very important things. Namely, Jordan Zimmermann can resemble his old, pre-injury self when he has a handle on his once deadly slider. It showed us that the Tigers’ bullpen is pretty dang good now, and might have some unsung heroes, such as long-man Warwick Saupold. This series also showed us two different sides to the Tigers’ sometimes explosive, often frustrating offense: they can destroy weak pitching with the long ball and rack up extra base hits and they can play a little smallball, move runners along, and cash them in at opportune moments.

Almost everything went right for the Tigers in their three-game sweep of the lowly White Sox. And when something didn’t go as planned—such as de facto ace Justin Verlander leaving Sunday’s game early with a groin injury or stalwart set-up man Alex Wilson faltering in the eighth—different players stepped up to carry the team.

More after a word from our sponsor!

Warwick Saupold. What to say about Warwick Saupold? He doesn’t have the biggest arm, nor the most exciting arsenal, and yet he’s gotten the job done, for the most part, since his recall from Toledo. Saupold, a starter with the Mudhens, has pitched out of the bullpen, eating innings, mopping up after duds from the starters, and saved the rest of the Tigers’ ‘pen. When we talk about the bullpen turnaround the Tigers have enjoyed—the Tigers’ ‘pen sported the fifth best ERA in May—we often zero right in on the big three of Shane Greene, Alex Wilson, and Justin Wilson. We’d be remiss not to mention Warwick Saupold, whose emergence as a reliable innings eater has given manager Brad Ausmus one more arm he can count on.

Stats like FIP and WAR don’t seem to like Saupold very much, but we should bear in mind that he’s a reliever. The more telling stats are probably K% and BB%, both of which are above average. Saupold has a 25% K% (league average is 21.5%) while his BB% is 7.1% (compared to a league average BB% of 8.7%). The Tigers’ ‘pen needed to get help from an unexpected source and they might have found it in the Aussie.

Jordan Zimmermann was another big story from the weekend series against the White Sox. Zimmermann has had a miserable time of it lately. Although he insists he feels healthy and often points out that he likes how his stuff looks and feels, the results haven’t been pretty. Experts like Jim Price have pointed out how flat Zimmermann’s once dangerous slider has looked at times this season. 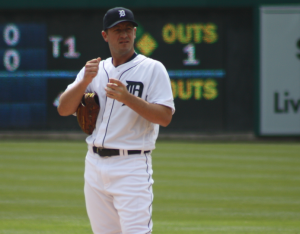 Zimmermann would face a test in the White Sox in the second game of the three-game set. If you’ll recall, his last start came against the White Sox in Chicago. Zimmermann turned in a dismal, frustrating performance that left the big righty scratching his head and searching for answers that seemed to elude him.

After the game, Zimmermann watched video of himself from his Washington days, specifically searching for his slider grip. Believing he’d figured out the source of the problem, Zimmermann threw a bullpen session to Ausmus. As Jim Price noted, Ausmus told him prior to discovering the fix, Zimmermann threw to him in a bullpen and “the slider was flat.” After making the adjustment with his grip, Zimmermann’s slider looked “much improved,” according to his manager. The key would be taking what he’d discovered during his bullpen sessions into an MLB game.

Zimmermann showed more than just flashes of his old self during his start on Saturday. He rediscovered his old slider, and according to Chris McCosky, Zimmermann got nine swings-and-misses on his slider. The slider had depth and bite, which it had been lacking in previous starts, and was able to keep Sox hitters off his 93-94mph fastball.

So, you ask, what have we actually learned about the Tigers? Well, for one day at least, Jordan Zimmermann pitched like his old self. We learned that, given a chance, other members of the bullpen may step up. And we learned Tigers baseball is kinda fun right now.

The team needed to tread water and survive a difficult month of May, which they managed to do (barely). They then needed to come home and take care of business against some beatable teams, which they did for three games at least. While Anabeim isn’t having a terrific year, they can still beat anyone, even without injured superstar Mike Trout. For the Tigers to have a realistic shot at the division (as well as the wild card), they need to take advantage of this portion of the schedule.