OR: Fun With Small Sample Sizes

April 5th was the Detroit Tigers’ first offday of the 2019 season. The Tigers, as one might expect, sit at 5-3 and are currently in second place behind only the Minnesota Twins despite a -4 run differential. It’s what we all expected, right? Right!

How have the Tigers done it? Most fans expected a dismal start to the season, considering the Tigers did next to nothing to improve on a team that staggered to a 64-98 season the year before. So, what gives? Well, the starting rotation, which one might reasonably expect to be terrible, especially with the absence of Michael Fulmer due to Tommy John surgery, has been carrying the team this first week.

More after the cut!

Matthew Boyd has turned into a strikeout artist, racking up double-digits in K’s in both his starts. The much-maligned, often injured Jordan Zimmermmann has also had a strong start, working a changeup into his changing repertoire.

Even newcomers Matt Moore and Tyson Ross, whose contracts fans lamented during the offseason, have held their own, giving the Tigers chances to win. And just yesterday, rookie Spencer Turnbull showed he wasn’t overmatched; despite facing what could best be described as a not-so-intimidating Royals lineup, they’re still Major Leaguers and this was still Turnbull’s first Major League start. Turnbull didn’t disappoint, and when he got into trouble he didn’t panic either, giving the Tigers all they needed: a chance to win.

The bullpen has also been a strength these early days, keeping the team in tied games or helping them to hang around in games where they’re trailing, but also holding onto the leads. Outside of a hiccup from Joe Jiménez in Toronto, in which he lost a 3-0 lead on a 3-run pinch-hit homer to Rowdy Tellez, the bullpen has been reliable. 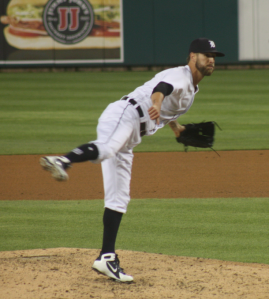 The Tigers have even gotten contributions from unheralded bench players in Gordon Beckham and Dustin Peterson. Beckham hit a pinch hit homerun off Chad Green to help the Tigers to a win just the other day, and in that same series, Peterson came through with an RBI double off Aroldis Chapman to lead the Tigers to a 3-1 win.

Miggy’s been a bit unlucky. (Photo by Alexandra Simon)

The biggest problem, so far, is the overall lack of offense from the rest of the lineup. While Miguel Cabrera has hit the ball hard with nothing much to show for it—and we’re nowhere close to worrying about him yet—it is something to keep an eye on. Christin Stewart’s start to the season could be cause for concern, but like Cabrera he’s hitting the ball hard and it is still very early. He doesn’t look overwhelmed, despite his rookie status. Mikie Mahtook, who had a red-hot spring, is still hitless on the season, Josh Harrison looked like he was trying to do too much for a new team early on, and Jordy Mercer hasn’t really gotten the bat going yet. The Tigers will need these players to start showing a bit more on offense, though their defense has been just fine for the most part (and Harrison looks like he might be starting to settle in).

There are some offensive bright spots early on, though, in Nicholas Castellanos and—at least for one game—Jeimer Candelario.

Candelario appears to be healthy, and racked up five hits in one game in front of family and friends in New York. Castellanos collected at least one hit in five of their first six games, but has gone hitless in his last two.

Despite the warm and fuzzy feelings, it’s still extremely early and no one really expects the Tigers’ pitching staff to maintain their current dominance. But perhaps those of us who saw signs of hope for the future weren’t so far off the mark. Several of these players who are, so far, exceeding our expectations are under team control for years. Niko Goodrum, who’s looked impressive at the plate thus far, is under team control until 2024. Barring a trade, Matthew Boyd will be a Tiger until 2022. Closer Shane Greene won’t be a free agent until 2021. In fact, the only major contributor who will hit free agency at the end of this season is Nicholas Castellanos, and no one knows what the Tigers will ultimately end up doing with him; Castellanos could conceivably be locked up with an extension. Earlier in the winter, it’s doubtful many of us would have thought that even a possibility.

No one really expects these good feelings to last or for this team to continue to rack up wins. At the outset of the season, I predicted a 90-loss season (72-90, actually) and I’m sticking by that.

That being said, I think this season will offer us glimpses of hope for the future and we might be seeing some of them in action right now. Wouldn’t it be exciting for Matthew Boyd to emerge as a top-line starter…something very few of us expected when the David Price trade went down? What if Jeimer Candelario develops into the bat we were hoping for when Avila made the Justin Wilson deal with the Cubs?

It doesn’t hurt to hope, folks, and right now hope is all we have.

Visuals
• Matthew Boyd is doing something differently in 2019: 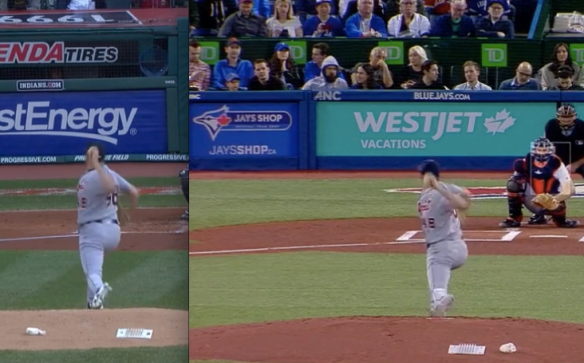